Scroll down to discover all the secrets of how Prosciutto di Norcia PGI is made. Explore each step in the production process, get to know its unique characteristics and appreciate its quality.

Older, heavier animals are selected, giving the ham its unmistakable pear shape and guaranteeing the perfect amount of fat and a weight of at least 8.5 kg.

The ham is salted twice over using sea salt.
First it is covered completely with salt and left to rest for a week at temperatures of between +1 °C and +4 °C and humidity levels of between 70 and 90%.
The salt is then removed and the ham is ‘massaged’.
It is then covered in salt for a second time and left to rest for longer (between 14 and 18 days). Once the second salt coating has been removed, the ham is brushed and massaged once again.
The legs, which have been laid flat until this stage, are now hung and left for between 2-5 months.

The legs are washed and dried again. Next, the exposed part of the muscle is coated with sugna, finely minced, seasoned pig fat. The process is extremely important as it protects the ham from external agents, keeps the inside soft, guarantees even seasoning and prevents it from drying out too much.

The hams are seasoned in specially equipped rooms, guaranteeing adequate air flow and the right balance of temperature and humidity. During the seasoning process, ventilation and exposure to light and natural humidity are permitted, taking into account the local climate. The seasoning process – from salting through to the sale of the hams – must last a minimum of 12 months as set out in the production specifications.

After seasoning is complete (at least 12 months) and checks have been carried out by the certification body for Prosciutto di Norcia PGI (3A Parco Tecnologico Agroalimentare dell’Umbria), the ham is ready to be branded and sold. The rind is branded with the logo of the Supervisory Syndicate for Prosciutto di Norcia PGI, guaranteeing that the unique production specifications have been met in full. 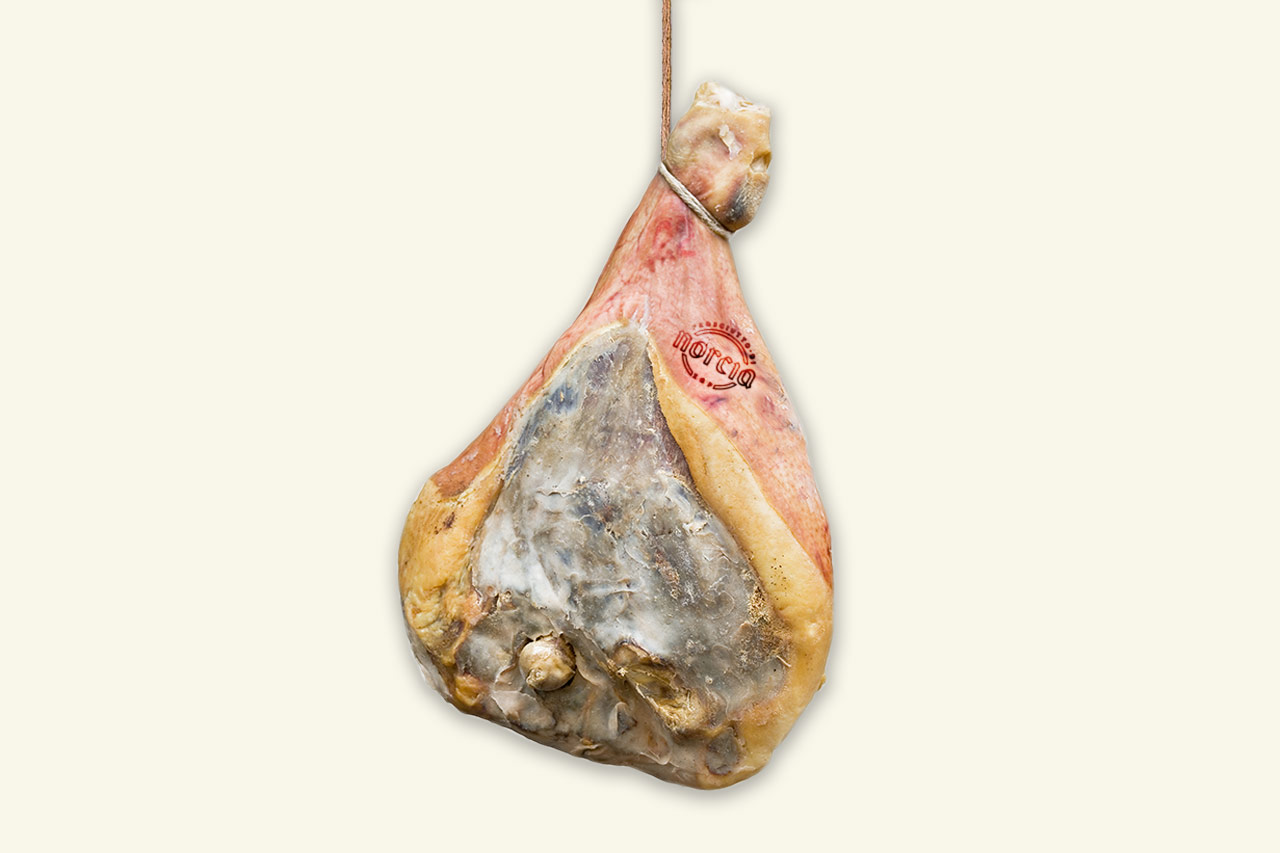 You can recognise Prosciutto di Norcia PGI from its distinctive pear shape.

Prosciutto di Norcia PGI is branded with the Syndicate’s mark on two sides. Only hams with the mark guarantee the highest standards of quality.

Prosciutto di Norcia PGI is flavoursome but not salty, with a delicately spiced fragrance. It is compact when sliced and ranges in colour from pink to red.

Each Prosciutto di Norcia PGI must weigh at least 8.5 kg.

Move your mouse over each area to discover what makes Prosciutto di Norcia PGI so distinctive.
2

Learn to recognise it

Only hams with the Prosciutto di Norcia PGI mark are guaranteed by the Syndicate.

The Supervisory Syndicate brands its mark onto every Prosciutto di Norcia PGI, showing that it meets the production specifications and guaranteeing authenticity for consumers.

A truly ancient history built on artisan skills, expert craftsmanship and centuries-old traditions firmly rooted in the local area. It remains a mystery as to why people first began curing pork in the villages around Norcia in the upper Valnerina valley.

Non-intensive pig farming had been widespread in the mountains and hills of Umbria since Roman times, the area’s forests and oak woods providing the animals with a natural food source.

The practice of processing pork and curing meats first sprang up in the area in the 13th century.

It appears to be linked to the school of surgery founded during the 1200s in the village of Preci, in the upper Valnerina valley.

The art of processing meat, handed down originally from father to son, became widely appreciated, and the first pork butchers or norcini began to emerge.

Moving from the mountains to the towns to seek seasonal or permanent employment, the butchers opened the first norcinerie (pork butcheries).

that’s good for you.

The ham’s nutritional properties come not only from the way it’s made, processed and preserved: even more important are the pigs themselves, the quality of their feed and the farming methods.

A combination of artisan expertise and the unique climate give Prosciutto di Norcia PGI its distinctive character.

Prosciutto di Norcia contains no preservatives or additives. Extremely natural and easy to digest, it’s the ideal food for everyone – from children to the elderly.

The ham is particularly recommended for sportspeople, since it is rich in good proteins.

They are easily assimilated thanks to the enzymes found in the lean part, which break the proteins down into individual amino acids during the seasoning process.

Fatty acids are vital for good health. The fatty part of the ham contains essential fatty acids such as linoleic acid and arachidonic acid; both are important for the membranes, the nervous system, for growth and many other vital functions.

The land is steeped in cultural and environmental traditions which remain untainted; here, nature and the customs of local communities receive the utmost respect.

The outstanding air quality, altitude and climate of the upper Valnerina valley – a centre of pork production since time memorial – all go into making Prosciutto di Norcia so unique.

High mountain ridges – which block moisture-laden air from the sea – and limestone formations – which help drain off rainwater – create the perfect balance of temperature and humidity: the ideal conditions for making the finest hams.

The care which goes into selecting the raw materials, expertise in the difficult art of processing and preserving meat, the geography of the local area and a determination to uphold ancient traditions have all enabled Prosciutto di Norcia to receive Protected Geographical Indication status. Real Prosciutto di Norcia PGI is only made in the municipalities of Norcia, Preci, Cascia, Monteleone di Spoleto and Poggiodomo, all part of the Valnerina Mountain Community and situated more than 500 metres above sea level.